The goal was to enlist in the Army and go into Special Forces. What happened instead was Duane Gentas joined the Army, received training in computer repairs, then was shipped off to Vietnam.

“Everybody asks me where I served in Vietnam,” Gentas said. “Well, I served all over the place. I’d go [to one place] for a month or two or three weeks, and [then] they would ship me to another place.”

Just to name one, Gentas was present at the Nha Trang Tet Offensive, where he lost some good friends. It always gets him when he talks about it, he said.

After about three years, Gentas was sent back to Fort Monmouth in New Jersey, where he had originally trained. Soon after, he was transferred to Fort Hood, Texas, where he met his future wife.

Gentas had taken up a job as a lifeguard – which earned him the nickname “Rocky” on day one, because an instructor saw him training on weights ‘just like Rocky Marciano did,’ – and met his wife while she was on-base staying with her sister. She came out to the pool one afternoon, jumped in and pretended she couldn’t swim.

What she didn’t know was that the day before two boys had jumped in and, if Gentas hadn’t been a strong swimmer he may have drowned trying to save them.

“So when she acted like she couldn’t swim out there in the deep end, I just took the shepherd’s hook and hooked her in,” He said with a laugh. “So that’s where I met her.”

Gentas finished his service at Fort Hood then went home to New York and worked as a correctional officer for several years before moving to his wife’s home state of Georgia, where he worked as a fireman and advanced paramedic in Dekalb County for the next 22 years.

In his 50s, he took on a job at the Emory University Police Department so his daughter could attend the college. When he put in an application to attend the police academy, the captain thought it was impossible for him to pass the physical exams.

She was wrong. Gentry told her he could make it to the top of a five-story building in less than a minute and proved it by jogging up the stairs in 46 seconds.

Gentas was active all his life until he became disabled from injuries, a medical condition and PTSD from Vietnam, as well as an injury to his arm while he was a firefighter.

Back when he was able, however, Gentas was an impressive athlete and put a few smug lads in their places.

During the police academy, he dropped and did 50 pushups compared to one snappy recruit’s 25. As a teenager running track, Gentas left one especially arrogant competitor in the dust.

Today Gentas lives in Putnam County and celebrated his 75 th birthday on Nov. 6.

I was reading [the] article “There is no objectivity to this,” which I found very interesting, albeit, sad!….. Until I came to the line about “dairy cows with horns and utters.” I had to STOP……cows do NOT have “utters”…..what they DO have are “udders”!! 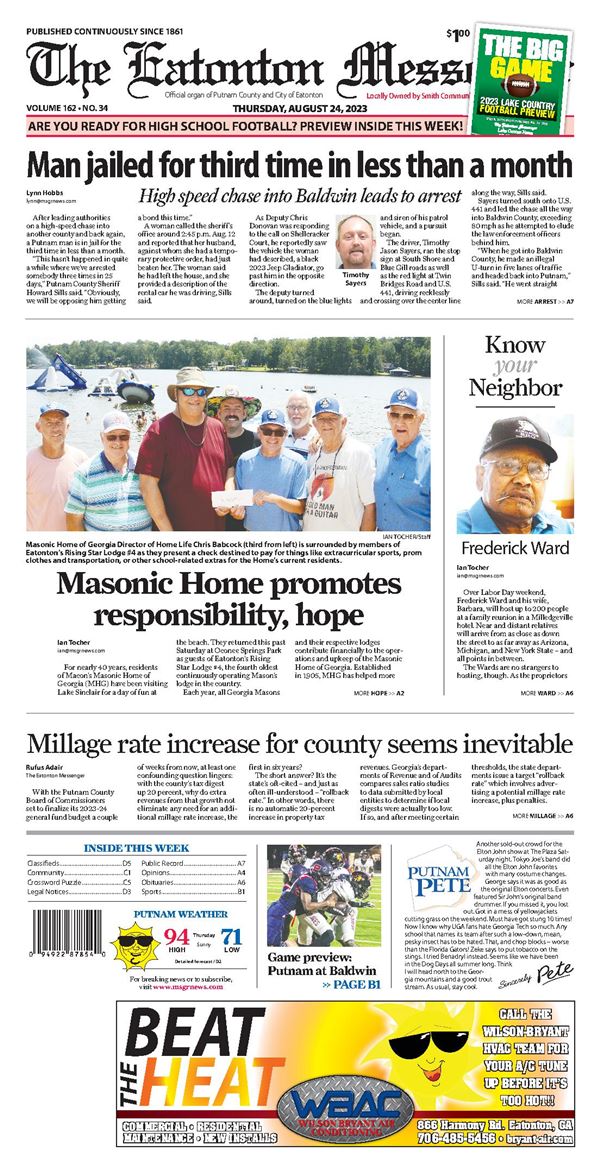